Getting Emacs Ready for Writin', Part 1

I'm working on a new book, Reactive Spring, and in the process I'm trying to level up my emacs-fu. I wrote most of my last book with my buddy Kenny Bastani, Cloud Native Java, in emacs and really enjoyed the process, especially having come from four other published books before that where the work was done largely in Microsoft Word, running inside a Windows Virtual Machine, running on my workhorse Linux desktop machine, a decade ago.

This time I wanted go further than just using emacs as a text editor with no plugins. I wanted to use some of the famed flexibility in Emacs. Today I spent a little time my with my friend Mario Gray tweaking emacs then I threw everything we did away and tried to get the meaningful stuff setup again, from scratch, avoiding all the mistakes made in the first run, so that I could explain them all here.

The pre-requisite is that you're going to need to install Melpa, a repository for the Elpa package manager. That's easy. Copy-and-paste the configuration shown in that file to your ~/.emacs file. You might have to create that file.

Once that's installed the rest is easy. You can use M-x package-list-packages to see all the possible packages. You should be able to find adoc-mode. You can install it by issuing M-X package-install and then specifying adoc-mode.

Now you can open up any file with Asciidoctor in it, issue M-X adoc-mode and it'll give you decent syntax highlighting.

Next, and hear me out. I want to use emacs for Asciidoctor editing and I want to use it to do light refactoring of Java code. Perfectly normal. It's a natu... I SAID HEAR ME OUT! I know. But it's normal. Java code is text, last I checked. emacs is great with text. So, I'll let that sink in. I want to edit Java code. In emacs. :whistles:

Still there? My book has tons of code and I need to be able to look at the code, especially when annotating it. I don't want to have to load a whole IDE just to annotate the code for use in the book as includes in that book. emacs is crazy fast and purpose-built for this sort of editing so it figures I'd do that in here. But i'm not the good Dr. Venkat Subramaniam. I don't write Java code without an IDE and hope to get away with it! I need the soft landing of syntax highlighting and in-editor compilation and feedback. Autocompletion would be nice too.

Now, keep in mind I'm not planning on using emacs for some of the things you might think I'd use an IDE.

I'm not using the IDE to format the code. That's done by the glorious Spring Boot Java Format Maven plugin which I've configured in all my Maven projects. I run mvn spring-javaformat:apply at the root of my project and it formats all my code consistently. If I don't run that command, it fails the build! So I don't need to worry about tidying up in emacs versus Eclipse versus IntelliJ. There's only one way to get code past the CI build and that's not in emacs.

I'm not planning on using emacs to do large scale refactorings (though, this emacs plugin does apparently support some of that. Which is nice.

All I want is syntax highlighting and the usual feedback. Tell me if something won't compile. Give me autocompletion as I type. The usual.

This is all quite elegantly acheived with a plugin called Meghanada. You can install it from your Elpa package manager as well. You'll need to copy-and-paste the configuration from the linked website into your ~/.emacs file as well.

Once it's installed, just point emac to a .java file. It'll automatically syntax highlight it and even offer auto-completion for types as you type. The first time it's used on a .java file it'll download a server - what I imagine to be something like, if not exactly like, a Visual Studio Code Language Server, that it uses to index Maven and Java projects. Truly, what a time to be alive! 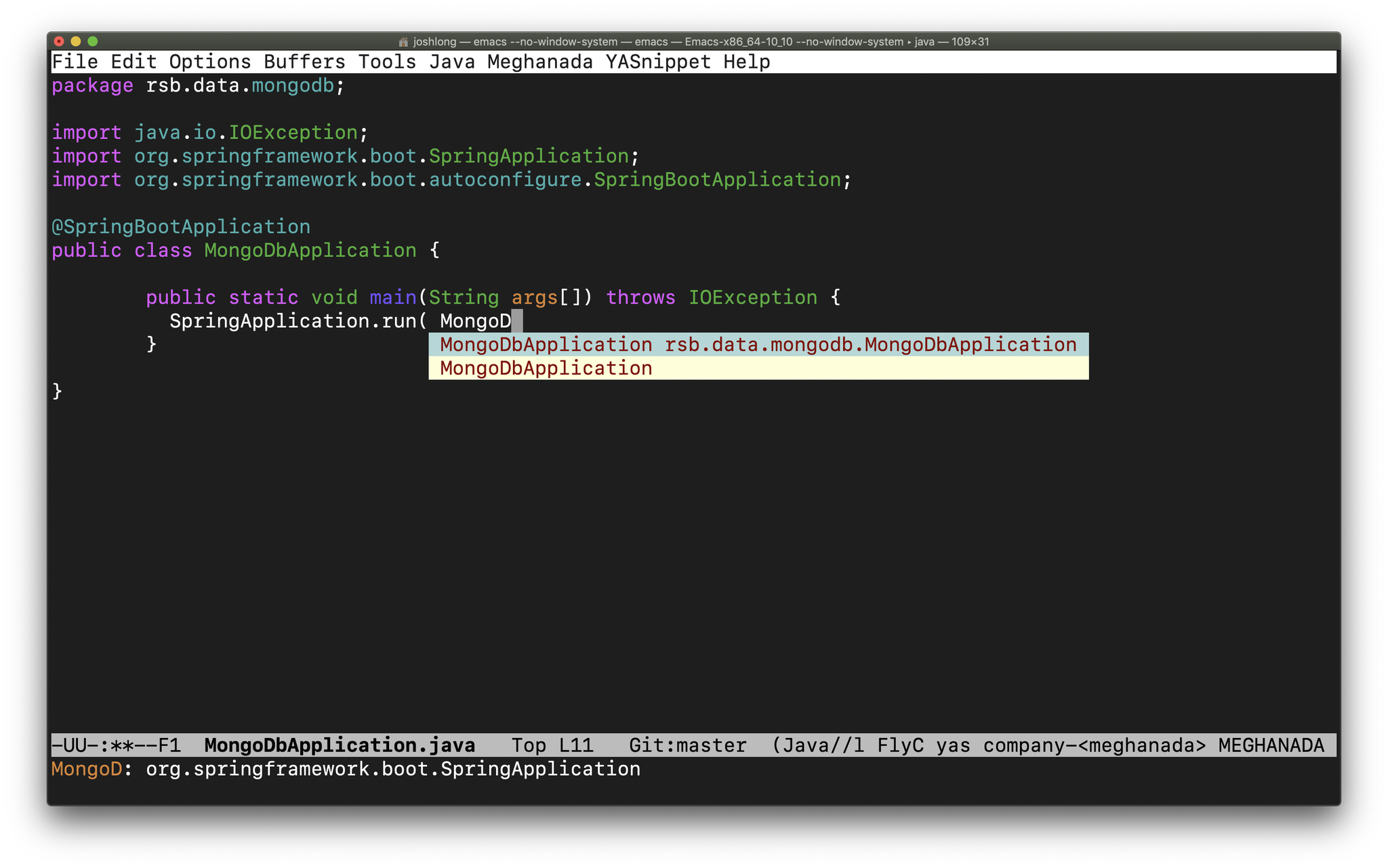 This is fresh getting everything working. Nothing else installed like markdown-mode+ or any of the other packages I had installed.

Thanks again to Mario Gray) for helping me get all the bugs ironed out to get this abomination working so smoothly! Now if we could only figure out why the lights in the room flicker every time I open emacs...